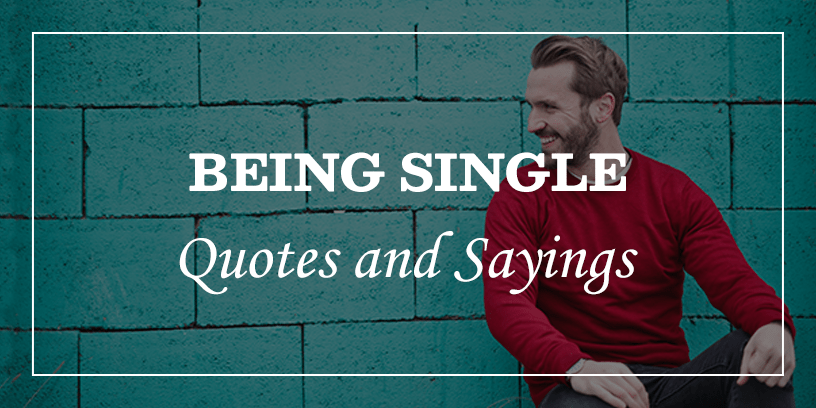 Being single is not just a status to update in social media, but it is a way of living by your terms there are no restrictions every second full of freedom in your precious life.
Single for life means it is something where you can get lots of perspectives on life which leads to a larger-than-life kind of lifestyle that is owned by very few people on this planet.
If you are single then nothing to worry live life by yourself rather than being in bull shit relations which leads to lots of pain (not in all cases).

So, being single is so better my friend and celebrate these moments by reading these being single and funny single quotes and sayings with images for both boys and girls. These quotes will tell about the single life and you feel proud to be single.

Being Single Quotes And Sayings

“I decided to stay single just Because, No one is loyal now a day.”

“Single isn’t a status. But it’s a word that describes a person who is strong enough to live and enjoy life without depending on others.”

“I’m single because I don’t need anyone to ruin my life. I’m ruining it perfectly on my own.”

“Yes, I’m single. And you’ll have to be amazing to change that.”

“It’s better to be single with high standards than in a relationship settling for less.”

“Don’t Rush into a relationship. Focus on finding yourself first.”

“Don’t wait for someone else to shape your life. Shape it yourself.”

“I’m Single but I Ignore People like I’m taken.”

“Sometimes being solo is wiser than being in a false relationship.”

“Hope for love, pray for love, wish for love, and the dream for love…but don’t put your life on hold waiting for love.”

“I am happy, because I’m single by choice, not by chance.”

“There are some places in life where you can only go alone. Embrace the beauty of your solo journey.”

“Choosing to be single isn’t selfish, it’s just smarter to be alone than with the wrong person.”

“Single is an opportunity to live life on your own terms and not apologize for something.”

“Being single isn’t a time to be looking for love, use that time to work on yourself and grow as an individual.”

“If you aren’t happy being single, you won’t be happy in a relationship. Get your own life and love it first, then share it.”

“I am single, because I haven’t found someone who deserves me!”

“Being single is definitely better than being with the wrong person.”

“Being single is much better than being lied to, cheated on, and disrespected.”

“I like being single. I’m always there when I need me.”

“Nothing is more satisfying than reaching the level of self-love so much that when someone walks out of your life, you let them.”

“Being single doesn’t mean anything is wrong with you- it simply means that there is a bigger picture unfolding in your life.”

“Being single takes a lot of courage to understand, as you’re completely alone in life yet allow yourself to love every second of it.”

“The joys of being single: Do what you want, when you want, with whom you want, for whatever reason you want and never have to justify it to anyone.”

Instead of single as a relationship status, I prefer “Independently owned and operated.”

“Some people choose to stay single simply because they are tired of giving everything and ending up with nothing.”

“I’m single, simply because I can’t find someone who’s worth my time.”

“I would rather be alone with dignity than in a relationship that requires me to sacrifice my self-respect.”

“If you’re still single. It’s because god is not ready to share you yet.”

“Being single is better than being in a relationship with someone who fills your heart with doubt.”

“I am not single. I am in a long standing relationship with fun and freedom.”

“Being single is not always a curse. Sometimes it is a blessing because you don’t have to worry about being disappointed.”

“Sometimes you have to stand alone to prove that you can still stand.”

“No crush, No love, No breakup, No stress, No tension. Singles are always cool.”

“In relationship, honesty and trust exist. If they don’t there’s no point of loving, so if you can’t afford to be honest, Stay Single.”

“I recommend to all my friends that they be alone for a while. When you spend a few years being who you are, completely unbiased, you.”

“Don’t be sad if you are single. At least someone else is not controlling your life.”

“Appreciate being single. Because that’s when you grow the most and with that growth, you come to know that you’re looking for.” – Daniel Goddard

“I have enough space in my hearts, but we are afraid of allowing animals shit and mess around with my feelings.”

“Stay single until someone actually compliments your life in a way that makes it better not to be single. If not, it’s not worth it.”

“People who have been single for too long are the hardest to love. They have become so used to being single, independent and self-sufficient that it takes something extraordinary to convince them that they need in their life.”

“The most profound relationship we’ll ever have is the one with ourselves.”

“Dear Single Girl, You’ve Got this Encouragement for the single girl doing on her own.”

“If you truly want to be respected by people you love, you must prove to them that you can survive without them.”

“Technically, I’m single, but my heart is taken by someone I can’t call my own.”

“Just because I’m single, It doesn’t, mean I’m alone. I have food and internet.”

“I’m not really single.
I’m dating myself.
I take myself out to eat.
I buy myself clothes.
I love me. I’m awesome.”

“Current relationship status: Made dinner for two ate both.”

“My level of single right now. I stood on a cliff and shouted “I love you”. My echo replied “I just want to be friends.”

“I was told I was dangerous. I asked why and they said: “because you don’t need anyone”. That’s when I smiled”

“When someone asks me why I’m still single. I guess I’m overqualified!”